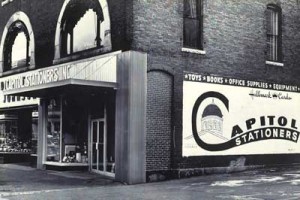 The space at 65 Main St was once called home by our founding father “Mr. B”.

It was here that the early days of Capitol Stationers got it humble beginings from 1953-1967.

If you look closely today, you can see where the original sign was painted along the wall next to the fire station. 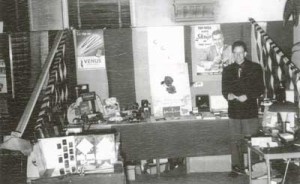 Our business was founded in Montpelier in 1950 by William “Bill”Bigglestone (Mr. B, shown left) and his wife Norah. Previous to this, Bill was a traveling office supply salesman visiting stationery stores throughout New England. Tired of traveling and eager to spend more time with his family, Bill purchased Richmond Office Equipment and reopened it under the name Capitol City Stationers.

Several locations popped up over the years in Barre, Burlington, St Johnsbury, and even Florida. Currently, it exists as a stand alone store on Main Street in Montpelier VT. In 1986, Mr. B’s Hallmark was established at the Berlin Mall where it operated independently under our founders namesake for 29 years, closing in July of 2015